I just had to share a fun recipe for a baked apple dessert called “bird’s nest pudding” that I recently discovered. Before I do, though, I also wanted to share some thoughts about a series of books that are familiar to many people: the “Little House on the Prairie” series by Laura Ingalls Wilder. I was fascinated by her depiction of life in the late 1800’s, and her writing is filled with such vivid descriptions of her surroundings that I always felt like I could picture every scene perfectly in my head.

Recently, I re-read these books with my youngest daughter and experienced them again through different eyes. Though the books are filled with gorgeous descriptions of the natural world, including the windswept prairies where Laura and her family lived, some details of their lives were quite startling to me as an adult. For example, in Farmer Boy, a school teacher used an actual whip on some older students. (To be fair, these students had bragged that they were going to “thrash” their teacher, so I suppose this could be considered self-defense.)

In These Happy Golden Years, Laura Ingalls got her first teaching job at the age of fifteen and boarded with a family in their small claim shanty. They had her sleep on a couch in their bedroom, dividing the living space by simply stringing up a sheet around that couch. While that very awkward arrangement would have been bad enough, the unhappy wife of the family bombarded Laura with verbal abuse every night by loudly complaining about her, knowing full well that Laura heard every word.

Also, in these books it was clear to see how white settlers and Native Americans faced a major clash of cultures as their lives intertwined, and they struggled to understand each other. Reading these books with my daughter gave me lots of opportunities to talk about what we read–what was startling, what was downright wrong, and what was right, as well. (For example, Laura’s father made efforts to convince his children and other settlers that the Native Americans weren’t bad people.)

Overall, I still enjoyed these books as much as I did as a child, but as an adult, I also found that they opened the door to lots of interesting and sometimes difficult conversations. All I can say about this is that I’m glad I read these with my daughter and that we talked about them. I don’t think it helps anyone to shy away from learning about the negative things that happened in the past, as uncomfortable as it may be to know the details. If we can learn from the past and appreciate what life is now, and if we can also be determined to continue to make things right and good for all people, then those difficult conversations are worthwhile.

A final thought: re-reading these books reminded me of how glad I am to have the following:

a washer and a dryer

computers and the internet

free public education (that typically no longer takes place in a one-room school house–plus, the teachers are not still teenagers themselves. Bonus!)

laws that also protect teachers from being beaten up by their students (!!)

no need to build my own house and/or furniture (unless, of course, I want to)

no need to sew my own clothing (ditto)

no need to wear a corset 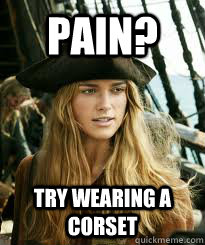 I could go on, but that would make this blog post way too long. 🙂 So, on to the recipe I chose to share! Farmer Boy remains my favorite of Laura Ingalls Wilder’s books to this day, because of one thing: they never seemed to stop eating! I loved the descriptions of all the meals Almanzo ate with his family. I always felt a bit hungry after reading the book, and sometimes wished I could make the same dishes they did. Browsing online recently, I came across a recipe for Bird’s Nest Pudding, a baked apple dessert. My daughter and I had just finished reading the very chapter where this dessert is mentioned in Farmer Boy, so we had to try it.

My recipe is adapted from one found on allrecipes.com. I increased the time spent in pre-cooking the apples, since they ended up a bit too crisp on my first attempt to make this dish. The second try worked out great, and everybody loved this sweet, baked treat. (Note: I baked the pudding in my dented metal pan, because I figured Almanzo’s mother didn’t have any glass baking dishes. I think it makes it look more authentic, don’t you?) *wink* Enjoy! 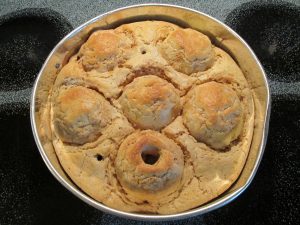 *In the book, Almanzo’s mother poured heavy cream speckled with nutmeg over the top of the dessert. You can make a heated cream sauce to top your bird’s nest pudding by mixing one pint of heavy cream, ½ cup of powdered sugar, and some ground nutmeg. 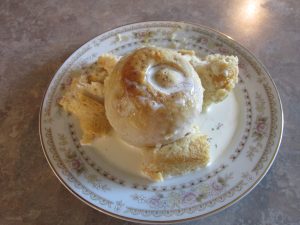 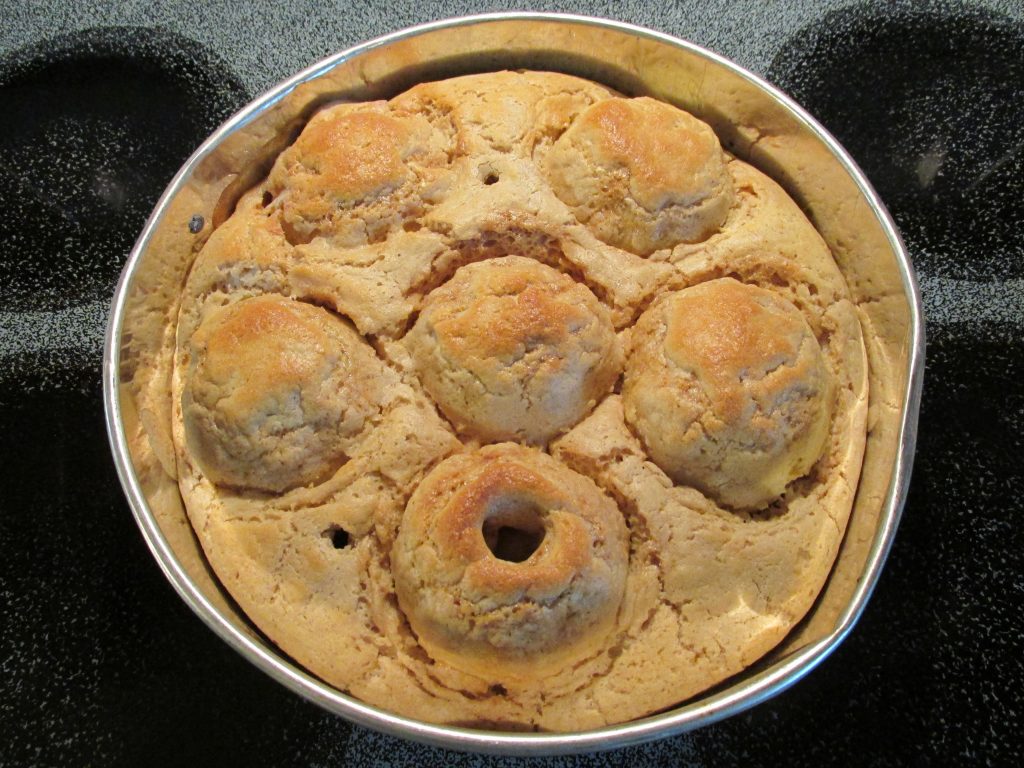