Recently I was with my youngest, waiting for my husband to come running across the suspension bridge in our town, since he was taking part in a 5k race that day. I was ready and waiting with my camera, hoping to cheer him on and get a few quick shots in before he hot-footed it away. While we waited, my daughter investigated the area around us. We were in a pretty park where there were benches, statues, and a great view of the Snake River canyon below.

While I kept my eye on the people crossing the bridge, looking for my husband’s distinctive white shirt, my daughter climbed onto the base of a statue of I.B. Perrine, the man who helped found our town more than a century ago. (Okay, she probably shouldn’t have done that, but something caught her eye.) 🙂 She reached up to the statue’s hand and took down a small rock, painted and with a colorful flower sticker on it.

You can’t see the rock in the picture because it’s so small, but that tiny rock made my daughter very, very happy. She was thrilled to have found what she considered a special memento. When she showed it to me and I turned it over, I was surprised to read something printed on the back in tiny letters:  “TF Rocks, FB.”  I had no idea what that meant, but I figured the letters “FB” had to mean Facebook, so I took a look when I got home. Online I found several groups dedicated to painting and leaving rocks around town, and even discovered that people I know are involved.

What’s going on is sometimes referred to as “art abandonment,” which is to create some kind of art and then leave it for someone else to find. The “Twin Falls Rocks” movement is a little bit like geocaching without the need for a GPS, and it’s dedicated to nothing more than doing something to brighten the community, put a smile on someone’s face, and spread a little sunshine around. The idea is to paint small rocks with anything that comes to mind–flowers, smiley faces, landscapes, geometric shapes, words, etc.  Then, the rocks are hidden in various places around the community with the idea that they are meant to be found, and then re-hidden or kept as a memento. 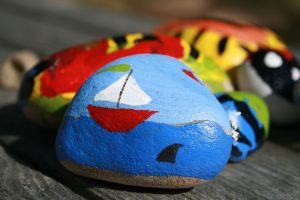 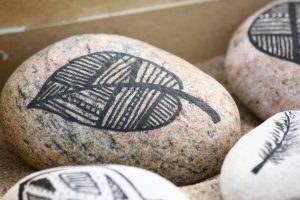 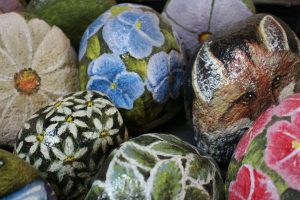 Members of the online groups dedicated to hiding rocks will often post photos of their latest artwork, and give hints as to where they’re going to hide them. Apparently, some painted rocks from my own little Twin Falls, Idaho, have been showing up in other states and even in places as far away as Italy and Argentina. How cool is that?

Thinking of how happy my daughter was when she found a painted rock, I knew I wanted to be in on this. I was sure I could create some beautiful rocks that would make someone’s day, so I found a few rocks and started painting. Ugh. The results were less than spectacular. :-/ Yes, I resorted to gluing a little jack o’lantern sticker onto one of the rocks. I couldn’t manage to paint one that looked halfway decent. 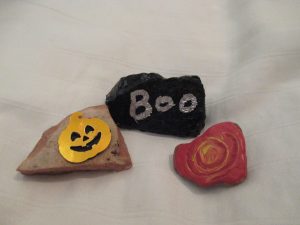 Oh, well. Anyway, even though I was rather disappointed in my pathetic artistic abilities, I decided to hide my Halloween-themed rocks somewhere in town anyway. Art abandonment is an idea that appeals to me. Just seeing the amazing rock paintings that others have done makes me want to do something to brighten up my world. And I think that we could all use a little something that makes us smile once in a while. 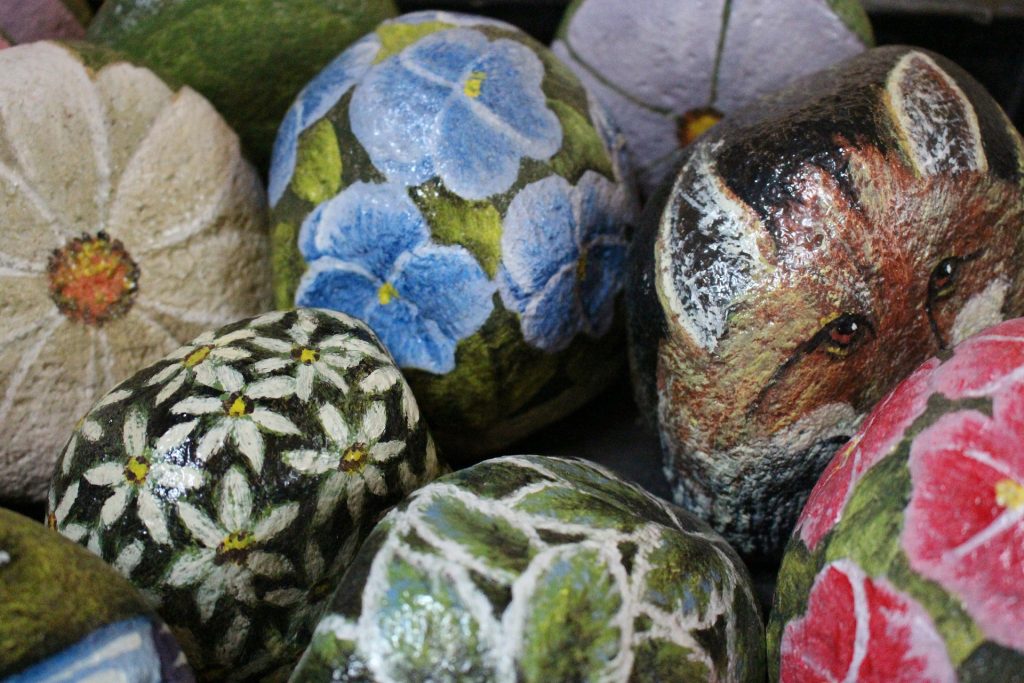